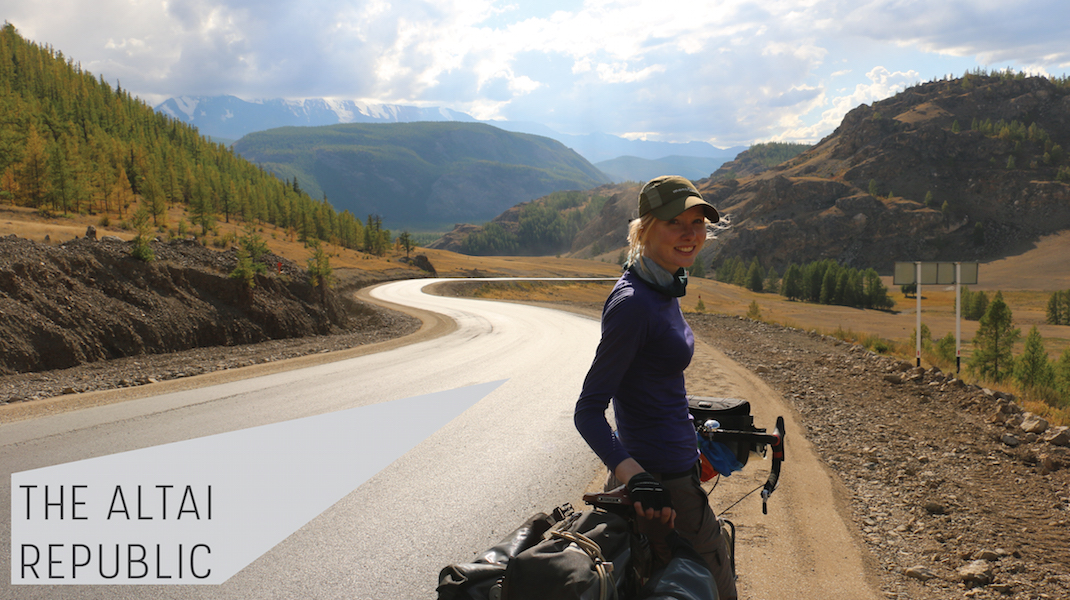 Having battled off road conditions for over 800 km through tough corrugated tracks and desert paths on the last leg of our Mongolian trip, we were greeted by Tarmac once we crossed the border into the Altai Republic, Russia.  To myself and Laura it may as well have been a welcoming red carpet unfolded out for us!

The road, the Chusky Tract,  we travelled on, from the Mongolian border through the Altai, was a cyclists dream offering some exhilarating downhill stretches.   Considering we started at an altitude of over 1500 mts at the border town, Kosh Agach, to our current position of just over 100 mts at Barnaul it’s possible we may have dented some Russian pride as we occasionally whizzed past labouring Ladas as we took full advantage of the downhill decent. 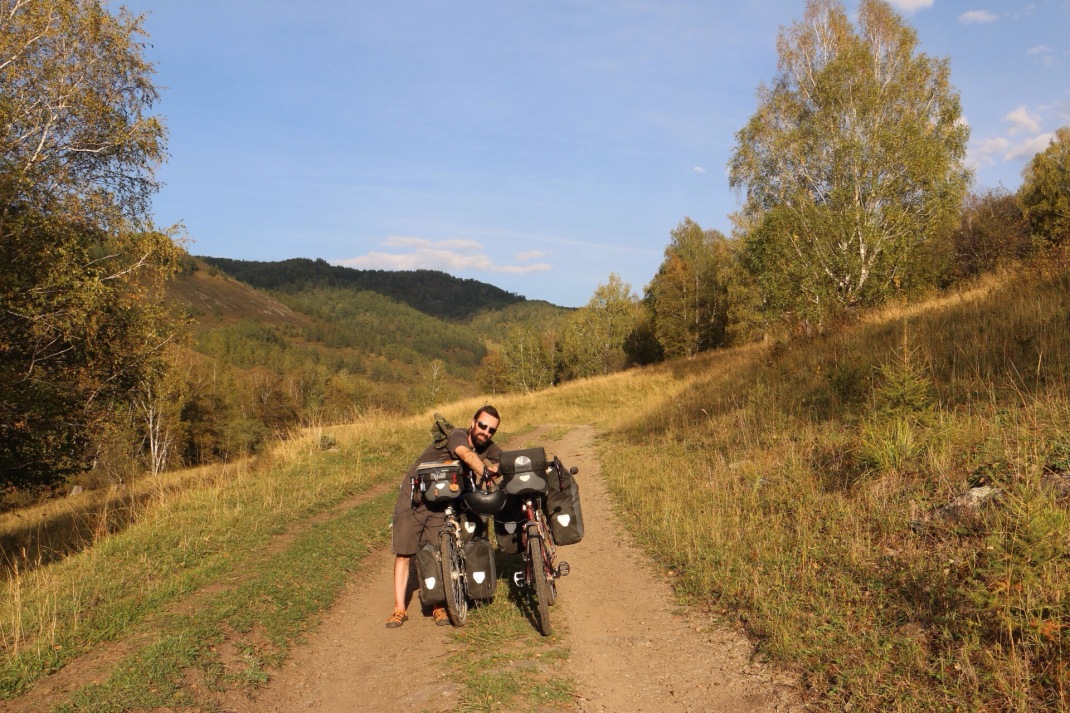 Gradually moving from the open steppe of Mongolia to the forested hills and mountains of the Altai. There is no greater joy than freewheeling at speed down a hill!

My tyres (Schwalbe Mondial) were on their last ‘legs’ as we crossed into the Altai Republic. To save weight we only had one spare tyre between us, perhaps a bit risky considering the terrain we were up against, but generally they held up well, despite what the above picture may suggest. The sidewalls of my tyres were quite weak and prone to rip and tear, so whenever there was a weak spot I would reinforce the tyre from the inside with old fabric,sugru,  parts of an old tyre tube and super glue, crude but effective!

We have been spoiled for choice for camping options. Most nights we were lucky to camp near rivers and have shade and shelter under trees. Also, heads up for Maps.me users, the offline navigator.  There were many wild campsite suggestions by it’s open source users that were most helpful.

Adding fruit and berries was always a nice addition to our breakfast porridge. We seemed to have timed our entry into the Altai perfectly as there was an abundance of fruit and berries available either growing wildly in the forests or being sold by the road side by local people.

We lost a lot of weight during our 40 days in Mongolia, maybe a stone each, so we’re trying hard to fatten up. A lot of really good honey is produced in the Altai, so we are currently having it with everything, our favorite snack combination at the moment is bread with peanut butter, salami, cheese and drizzled in honey…

It’s nice to be able to drink coffee again. This montbell filter and chopstick pairing works a treat for a drip brew.

We’ve being drinking a lot of the local tea. It’s pretty delicious. The tea consists of herbs and flowers collected and dried from the forests. It has a slightly bitter, grassy taste which sounds a little off-putting but it’s actually extremely refreshing. 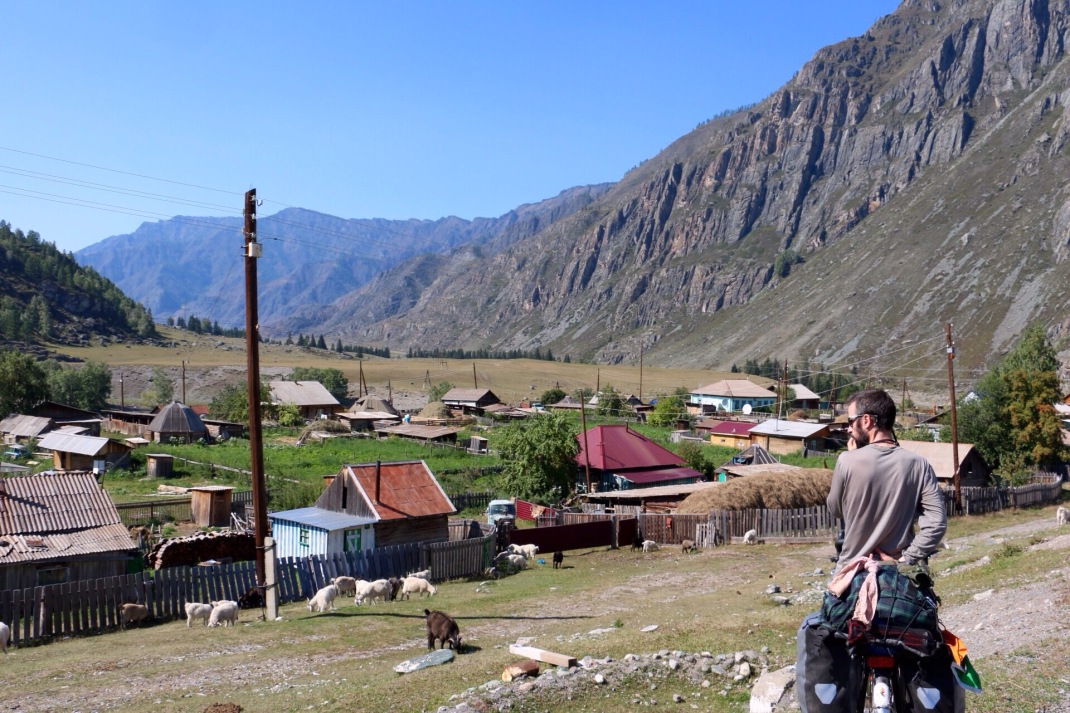 The homes in this region look like they were designed using blueprints from a brothers Grimm fairytale! There was always a whiff of burning pine wood in the air as we approached villages. 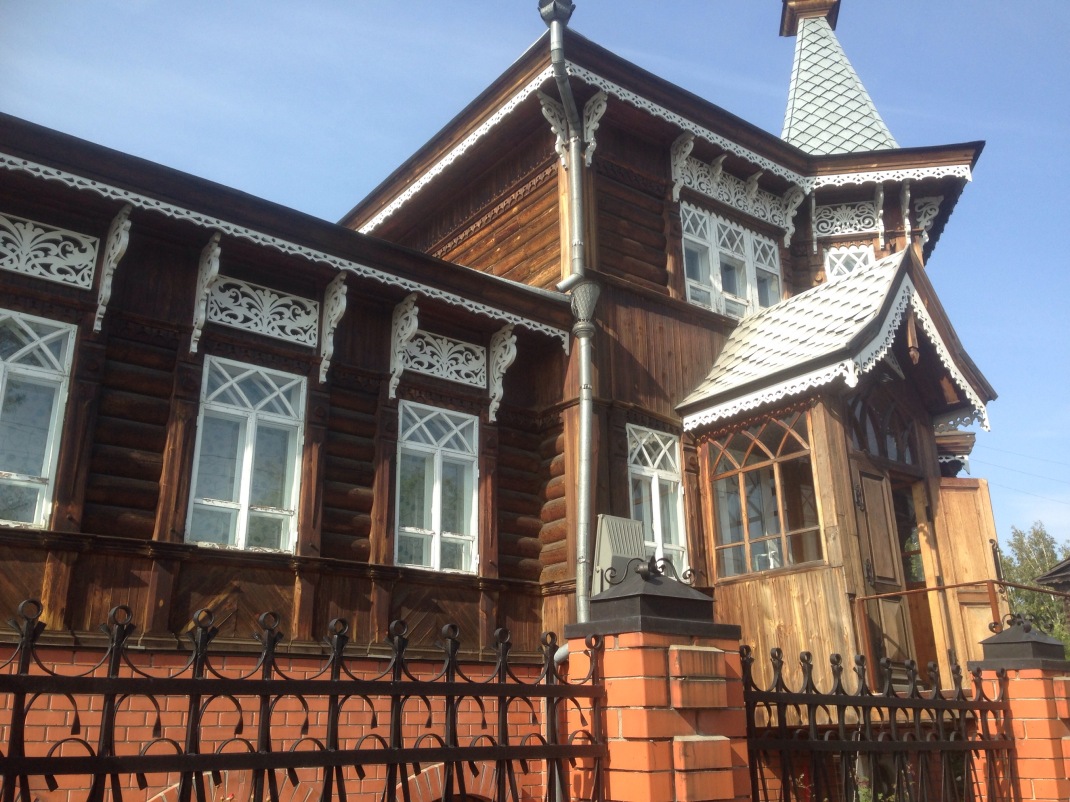 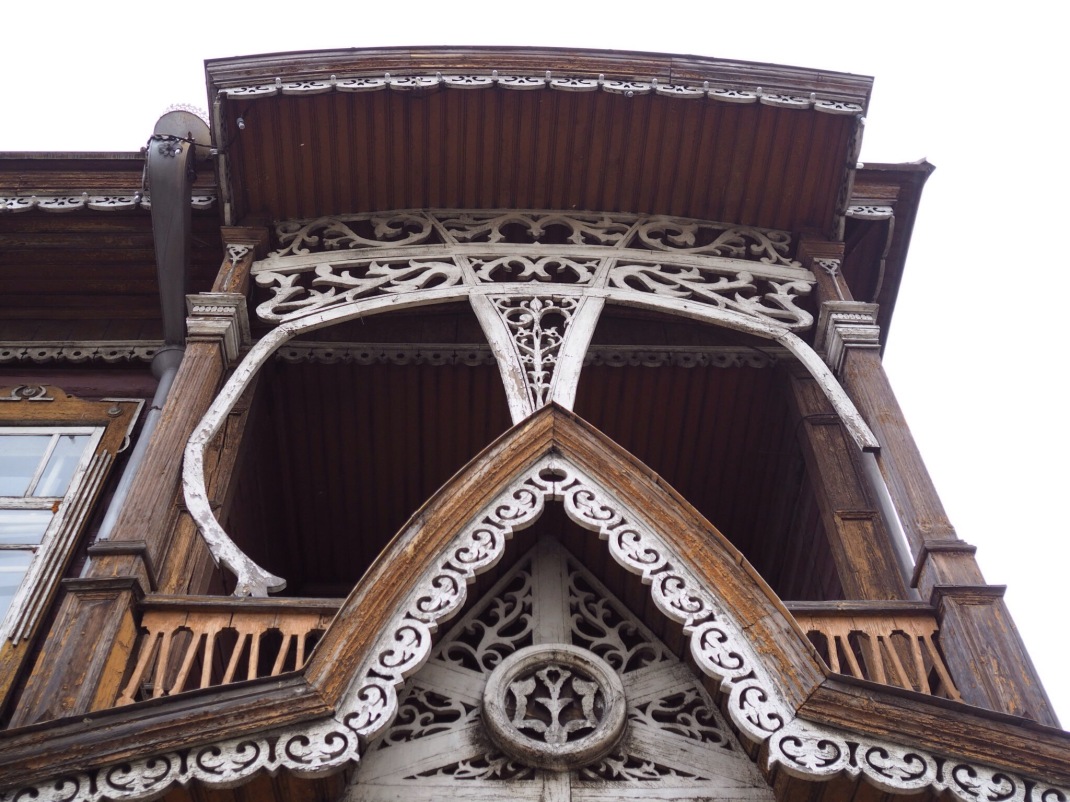 Some houses, particularly in towns, were elaborately decorated with intricate woodcarvings. 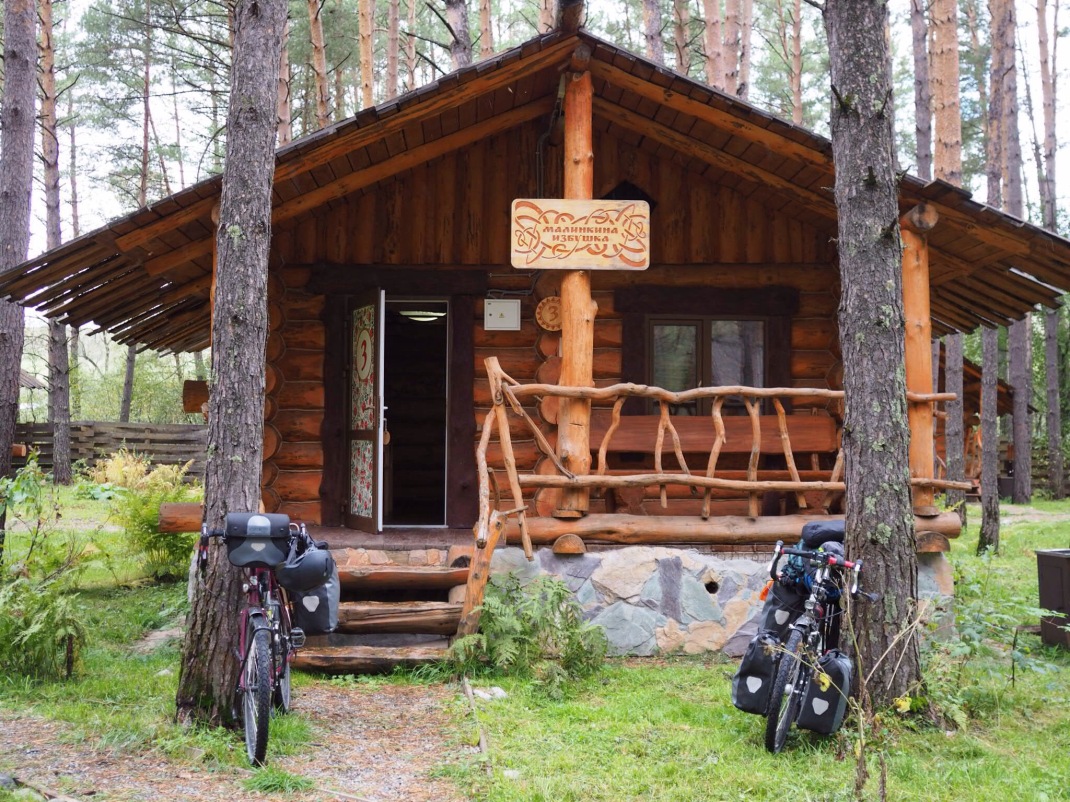 The region was dotted with cozy log cabins available to rent. Sometimes it was just too hard to resist staying in one for a night.

Our morning sauna, traditionally called a banya in Russia, being prepared by burning pine wood in a log burner. 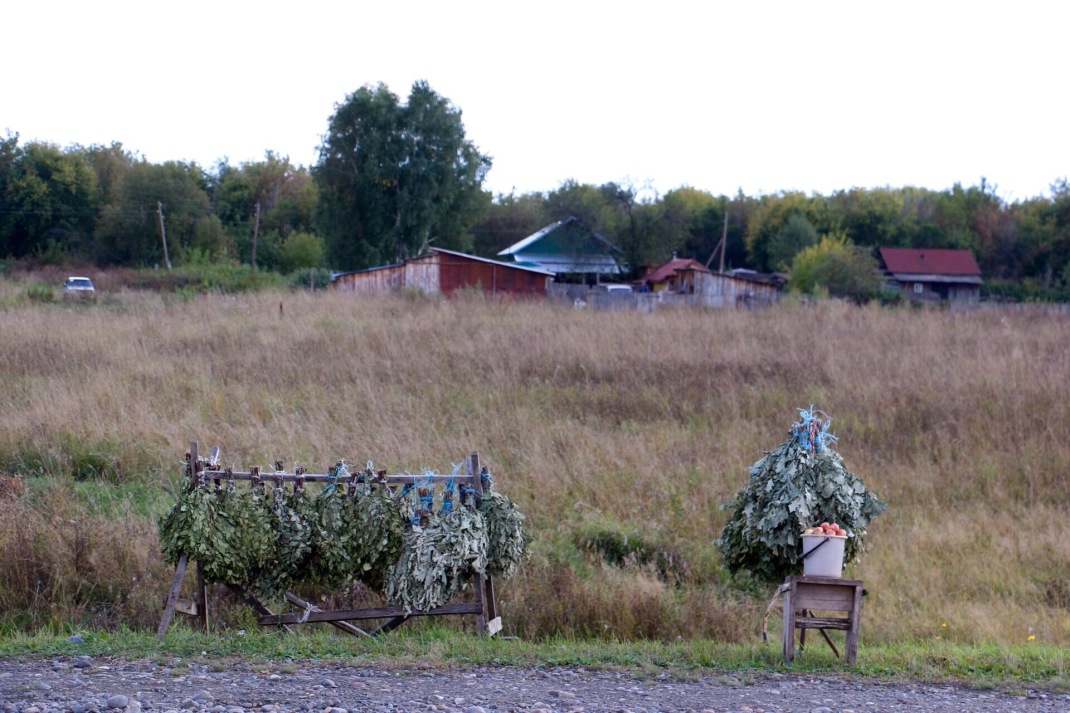 Along with fruit and veg we saw a lot of these leafy twigs being sold on the side of the roads.  They are used in the banya to hit yourself while you baste in your own sweat! Whatever you’re into i suppose!…

Early morning rising sun and dewy spider webs. The temperature drops quite a bit at night. It could easily drop 25/30 degrees as the sun sets, so it can be pretty chilly.

We try to keep an eye out for these little wooden benches and chairs that are dotted along the roadside for a spot for lunch.  We have no idea who makes them, we think they may belong to the roadside fruit sellers, some are beautifully decorated with table cloths and flowers in a vase.

Pretty impressive Soviet-era statues still stand prominently in most of the towns we passed through.

We randomly bumped into another traveling Irish man, William Bennet,whose trip is a lot more impressive than ours. He’s planning to cycle around the world. You can follow his progress here.